A new, almighty challenge...But a good one! 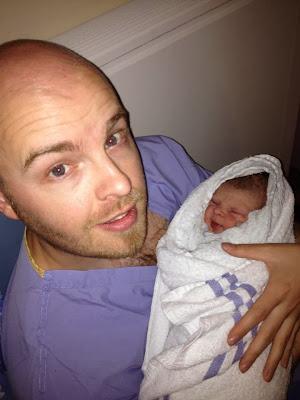 It's been a while since I last posted a blog and for a very good reason. On Sunday September 22nd at 10:50am, my son, Lucas was born.

First of all, the name... Lucas is named after the latin for Bull Shark (Carcharinus Leucas), albeit without the "e" as his mum wouldn't let me have that, seeing as people seem to have inexplicable difficulty with my surname as it is!

Unfortunately, what is now, in the 21st century, a relatively straightforward medical process, we haven't been quite so lucky with the birth of our boy. Twenty six hours of labour and excruciating pain meant Nicky had to have an epidural, this was followed by an inducement to attempt to bring on the birthing process. Within the hour, we were rushed into theatre for an emergency cesarean, at which I was present the whole time and let me tell you, it's a frightening experience, bad enough for a father, but ten times worse for the woman. After about forty five minutes, a tiny little, grey human looking thing was flashed in front of our eyes before being whisked away as he was not breathing. Thankfully, after a couple of minutes resuscitation and breathing aides, he came around and was handed to me to hold for the first time. This was only the beginning, with an alarmingly long list of complications, difficulties, discharges from hospital, re admissions to hospital, you name it, if it could go wrong, it has and Nicky is still in hospital, having spent only five of the last twenty four days at home.

Last Monday (October 7th) when the midwife visited on one of the few days we were all at home since Lucas' birth, Nicky told her how poorly she was feeling, running a temperature, lethargic etc, the midwife immediately called the hospital and informed them Nicky would once again be coming in. After various tests, she was given a blood transfusion but continued to deteriorate and on Saturday, was rushed into surgery to remove an infected abscess in her abdomen and uterus.

It's been an extremely tough time to say the least, especially for Nicky of course, she has had to watch a parade of expectant mothers come into the maternity ward one day then leave the next with their babies every single day, all this whilst suffering dreadful pain and discomfort and we haven't been able to do any of the exciting things new parents do with their babies yet. I have been trying to keep on top of the daily household stuff, combined with twice daily visits to the hospital, exhausting all nighters with Lucas on the days Nicky was home so she could sleep and two full day film shoots for a commercial client and the prep work on another commercial film job starting in early November, alongside looking after our dog, Missy, and the continuous cycle of washing baby clothes. 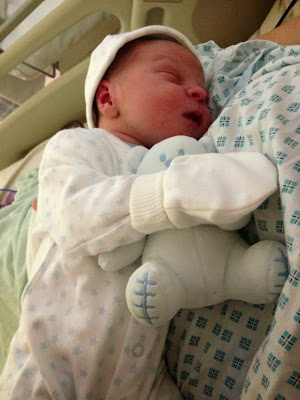 Thankfully for Lucas, he has an extremely brave mum who has had to deal with an awful lot of not just physical pain and stress, but emotional distress too, when every little thing is seemingly going against you, it is difficult not to let it get you to a point where you give up, but she has been a revelation and is already an incredible mum, I knew she would be of course, but she has surprised even me with her determination and resolute attitude. Safe to say, I am extremely proud of both of them.

The idea when I quit my job three years ago was to make my life as simple as possible to focus entirely on the film but obviously, fate has conspired to make this journey as difficult as possible but I wouldn't swap my little boy for anything, with that said however, any notion that this means I am no longer dedicated to "Of Shark and Man" and my film-making career with sharks, is completely redundant. That will not change, if anything, I am now even more focused on making a success of "Of Shark and Man" and all my future films, I am no longer just doing it for me, but also for my son, to make him proud of his dad, to give him a positive future in a better place and to show him that he can do anything he wants with his life, to set an example to him that life doesn't need to be a boring procession of "normality" and a dull 9-5 just to pay the bills, unless of course that is what he wants!

It's going to be hard, really hard, but I know I can do it and I am determined to make this a roaring success so that maybe one day, Lucas can take on the mantle from his old man!

With regards to the film, I haven't been able to do anything with it for the last three weeks but hopefully, will get a chance to do a few hours tonight. I have started on the final dive sequence and when that is complete, it's just a few UK based shots to add and a couple of changes to the intro and I'll be on to the sound design meaning we are really not far away from a first cut.

Now more than ever, if you believe in this project, I need your support. I need people to spread the word, create interest and when the crowd funding campaign for the release starts, I need people to help me make that a success. There will be a new teaser trailer soon, please help me spread that across as many platforms as possible and please, if you want to help, email me at david@officetoocean.com with the subject title "Street Team" and you can play an important role in promoting "Of Shark and Man" doing something incredibly easy which barely takes any time or effort at all!

I want music for the film from artists covering the following genres, Electronic, Ambient, Melodic Piano/String Instrumentals, Hip-Hop/Trip-Hop, Avant Garde... If you want to put forward your music to potentially be in a feature film, please get in touch!

Yes, I am slightly behind schedule but it's for good reason and rest assured, "Of Shark and Man" is looking every bit as exciting, ground breaking, innovative and cool as I had hoped, a bold claim maybe, but what the hell, it's true.

In case you haven't heard or seen much about the film, here are teaser trailers 1 & 2, if you dig it, give me a shout and get on board. We can do this!


"Of Shark and Man" Teaser Trailer 2 from Scarlet View Media on Vimeo.
Posted by OfficetoOcean at 19:33 2 comments: