A Vision Realised - How "Of Shark and Man" is finally becoming what it was always meant to be! 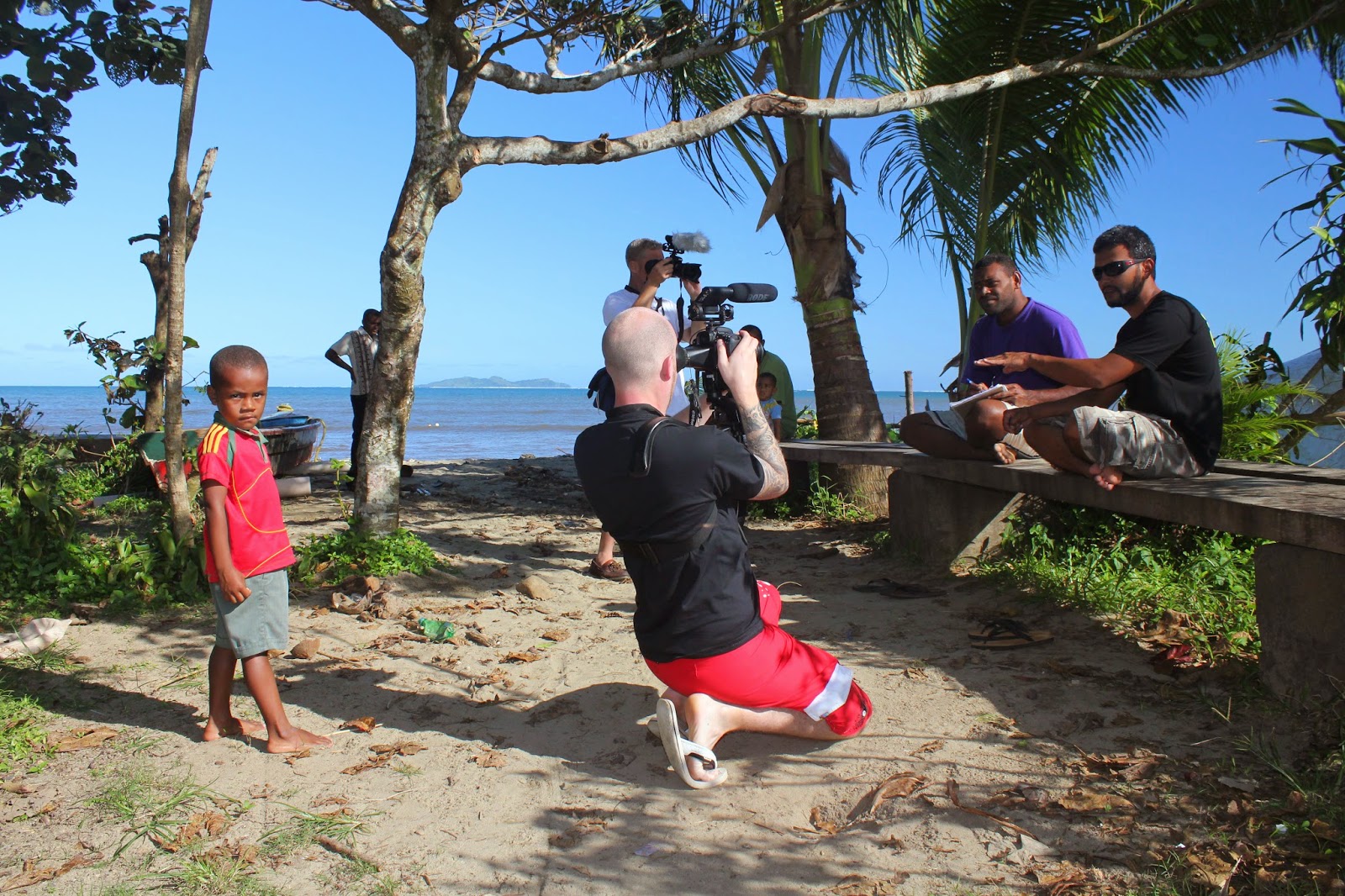 It seems about a squillion years ago now that I decided I was sick and tired of doing what everyone else expected of me and not fulfilling my dreams, ambitions and potential and decided to just jack it all in on the back of an absurd notion that I could just swan off to Fiji and make a feature length film that would get on TV, okay, maybe not a squillion but it's been four years and that's a long time to go through the trials and tribulations I've faced.

The constant threat of always being on the verge of going broke, giving up my home, constant (and I mean constant) rejection, self doubt, crises of confidence which literally left me a complete wreck, unable to create anything for weeks, ridicule and criticism, you name it, I've had it thrown at me over the last four years but in amongst the hard times there have also been some glorious highs.

Despite practically everyone telling me to stop being so stupid and just give up, I made it out to Fiji and it only took me nine months and twenty seven days to achieve everything I needed to to do that, a first time film-maker with no pedigree, gaining the funding to shoot a film in which he has complete creative control and 100% ownership of a film with no debt is almost unheard of and for that I have to thank the wonderful, innovative and forward thinking Jane West and Martin Harlow at Tourism Fiji for taking a huge gamble on me and who have offered nothing but support, encouragement and enthusiasm. Anything I achieve in my career will always owe a huge debt of gratitude to them.

I went from not even owning a camera and having never even attempted to make a short film, with zero experience, credibility, contacts, support or money, straight into making my own feature film, for which I would be 90% responsible for all the work, fulfilling every role imaginable along the way. Now, here I am in 2014, a professional full-time film-maker with, I'd like to think, a good reputation around the world, working in film, TV and commercial promo work, I'm a dad to an awesome little boy, I'm involved with some incredible conservation projects around the world and am finally getting a growing platform upon which I can help spread positive messages about sharks and also inform the public about important issues, being regularly approached to discuss in particular, shark feeding and shark attack.

This isn't a "hey look how great I am" post, I hate all that bullshit, anyone who feels compelled to constantly convince people of their talent, knowledge or credibility has nowhere near as much of any of those as they think, in my opinion, (I prefer to let my work and work ethic do the talking), no, instead this is hopefully encouragement for anyone else out there on the verge of taking the leap of faith I did. If you believe in yourself absolutely, you have thick skin, you can take rejection and you are willing to sacrifice and risk everything, go for it. It's a hell of a ride with more downs that ups but the ups will define why you did this in the first place and the downs will only confirm and define your character. If you give up easily or you have serious doubts, stay where you are, choose safety, this isn't for you...

So why all the above?

The last two months has seen massive progress on the film, in fact, it's really not far at all away from a completed first cut and my life has been consumed with Grading the film and overseeing the Sound Design, both of which have made everything explode into life and jump out of the screen at you. The addition of great sound and a great aesthetic has been the realisation that I may be sitting on something pretty amazing here...

Given the above retrospective look at how far this has all come, I figured I'd touch base on a few technical factors and also look back at the progression of the film and myself as a Film-Maker, from a naieve amateur who didn't know what "aperture" or "shutter speed" meant, to someone who people actually pay money to make films, and good ones at that too! :)

First up a few technicals... 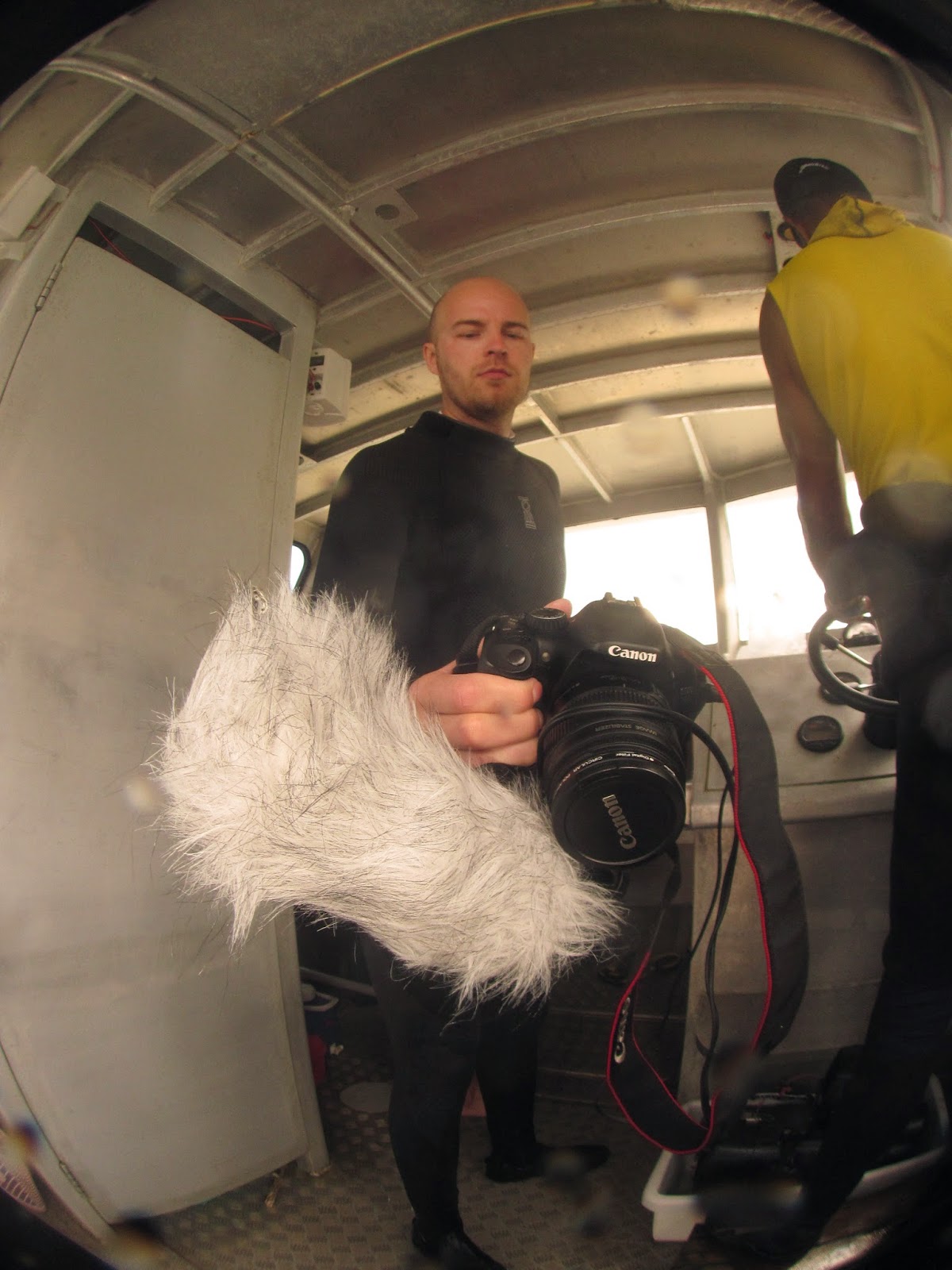 A major aspect of this film was that I wanted to shoot it on pro-sumer equipment, that is, gear which is high quality but affordable and available to the man on the street so not the Reds and Arri's of the world but cameras and production equipment most people can realistically afford to buy themselves.

So that gives you an idea on the budgets I was working on, thankfully and for which I am eternally grateful, Novatech build me my computers for free as a brand ambassador (and they are awesome!) and Canon gave me my camera. The Phantom we got to use for free as part of a test for a TV documentary and the XDCam belongs to Mike who became a member of the underwater cinematography team for a month! I won't say what our budget was but in Film-Making parlance it would be classed as "Micro Budget."

To give you a comparison, the average Shark Week production has a budget of around $200-300K and according to the production release from the company, for the recent "Shark Girl" show they needed to raise between AUS$850,000 - $1,000,000 to get it made.

Needless to say, my budget was a grain of sand on their mile long budgetary beach, but from the outset I set my "competition" not as the amateur "passion pieces" that are becoming more widespread, but films with budgets of £1,000,000+. I'm a one man band doing ninety percent of what's required from a spare room at my parents' house, I can't compete with the BBC but what I felt I could do is aim for a higher quality than that which is typically broadcast on the commercial terrestrial channels, in both content, style and technical film-making. Of course the single most important thing is content and story but the first way a production will be judged against the rest is in how it looks and how it sounds.

With that in mind, here are a few (heavily compressed) screen shots from the sections which have been graded so far so you have an idea of what to expect: 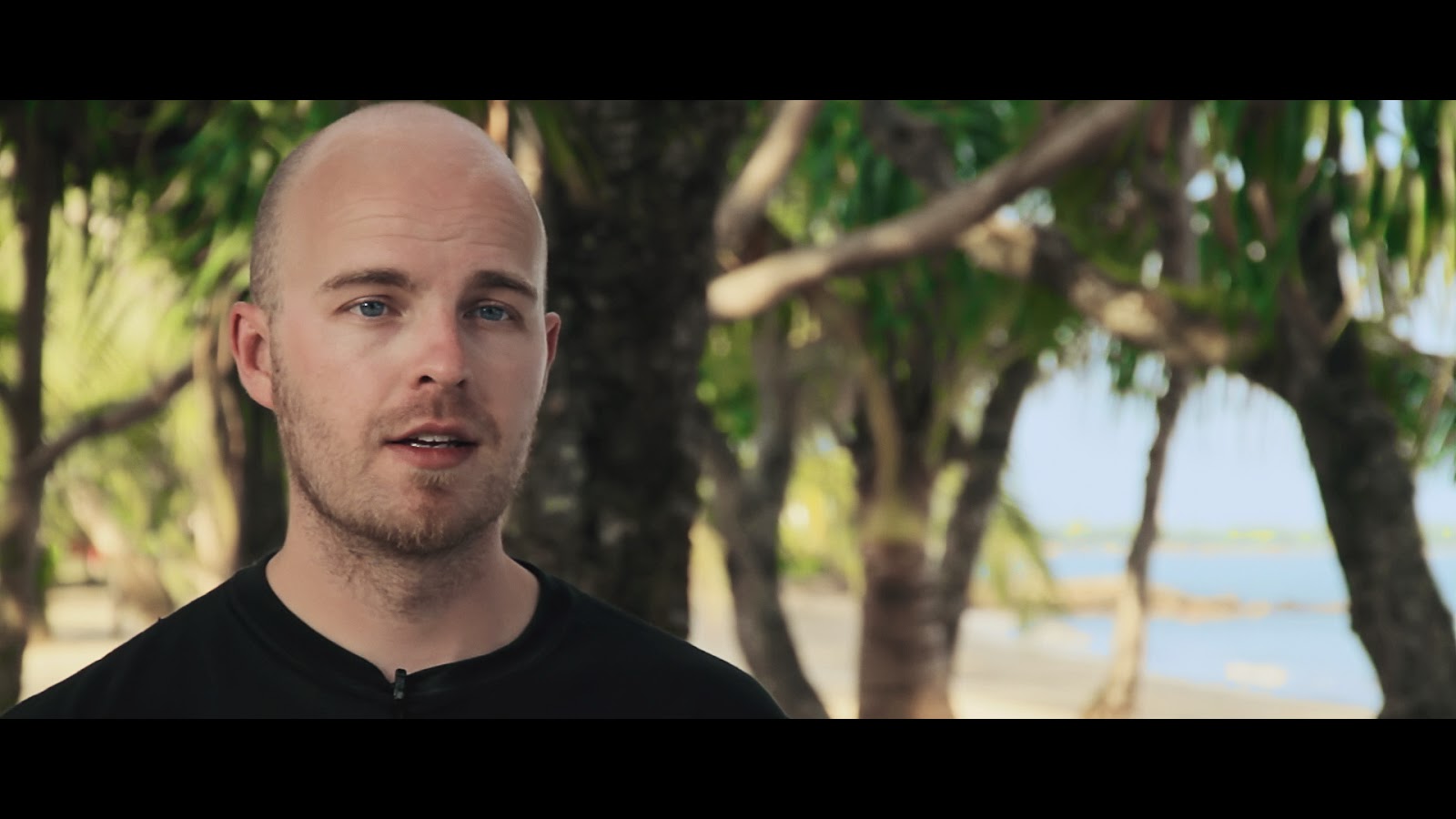 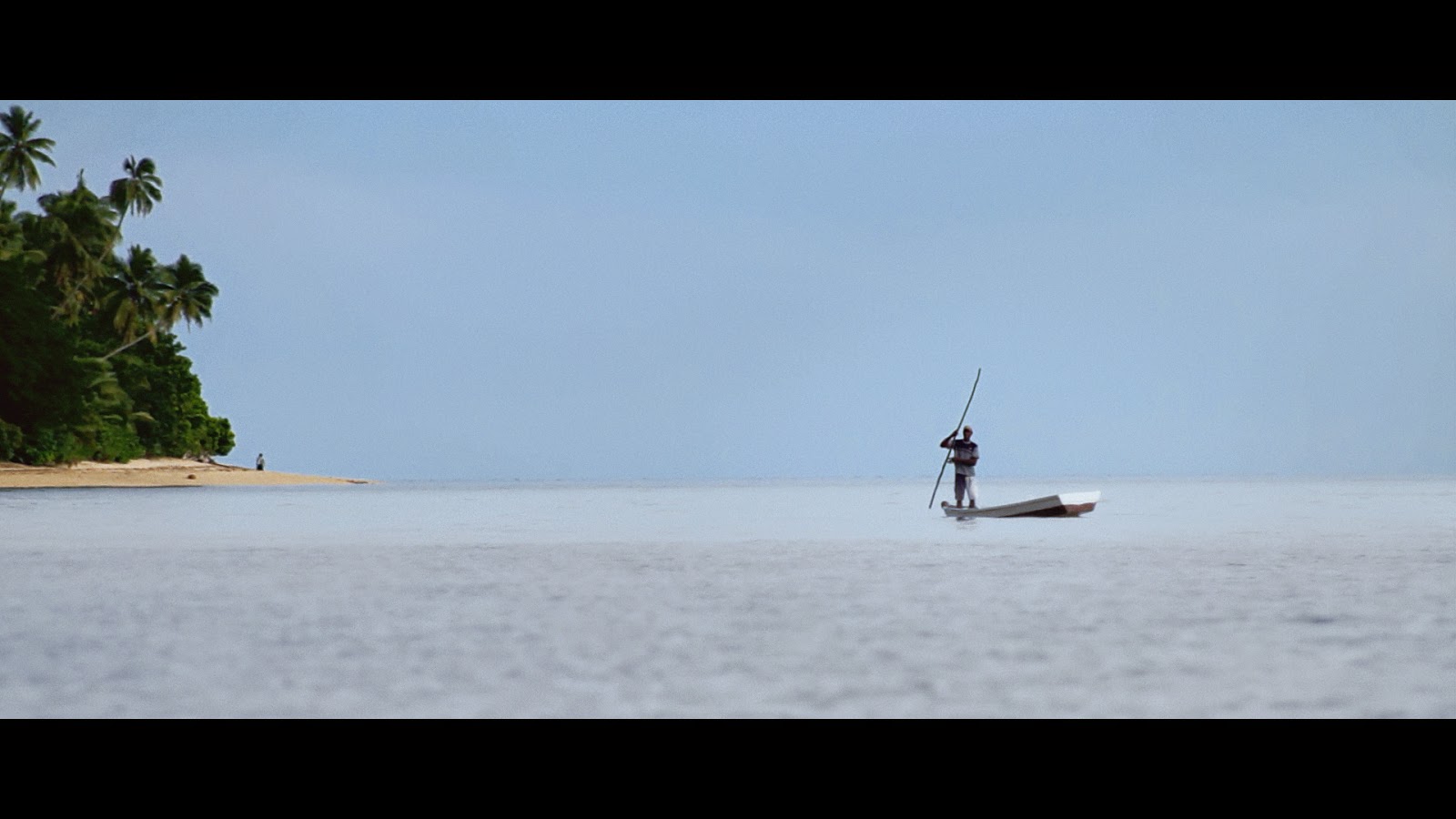 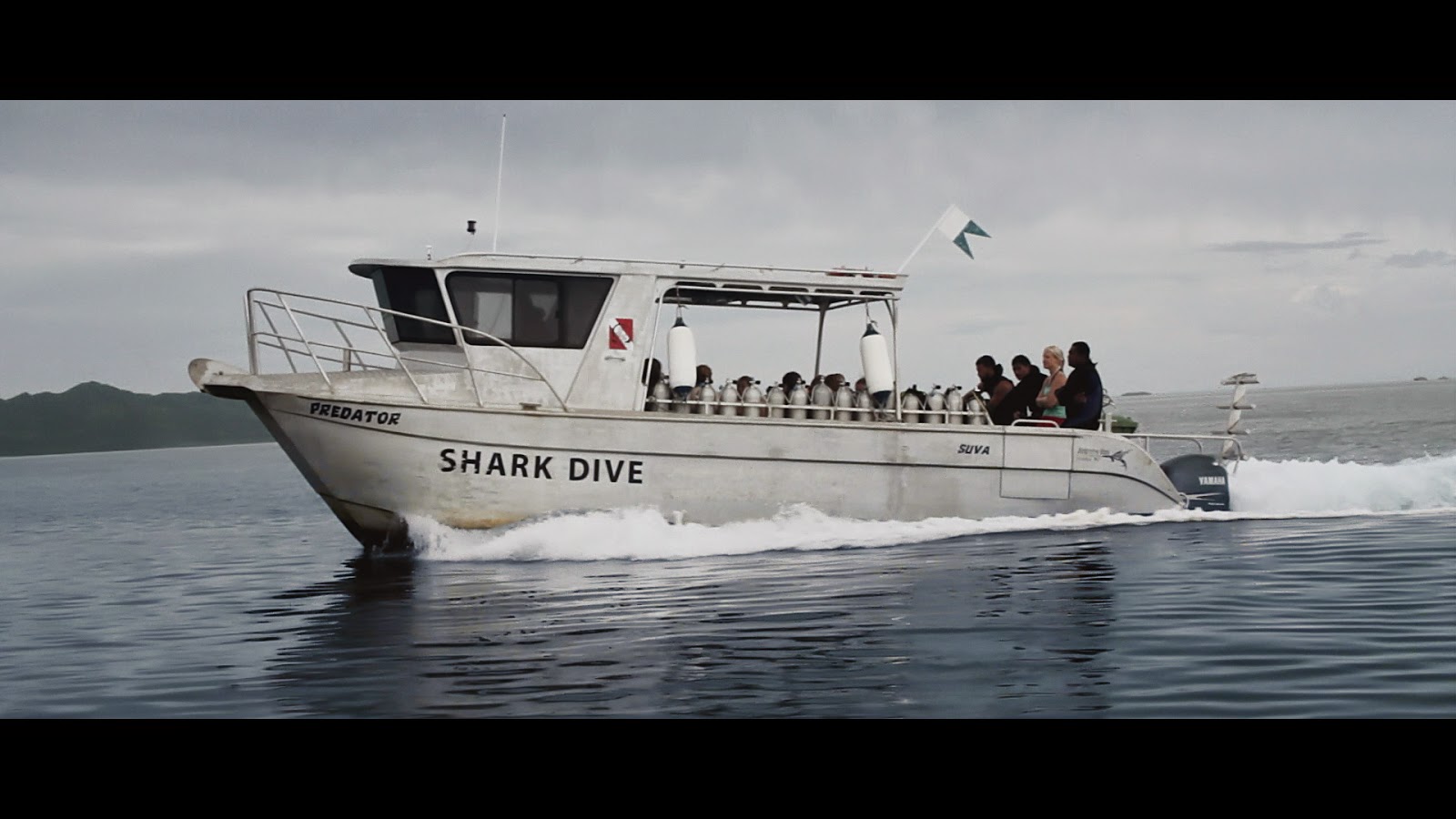 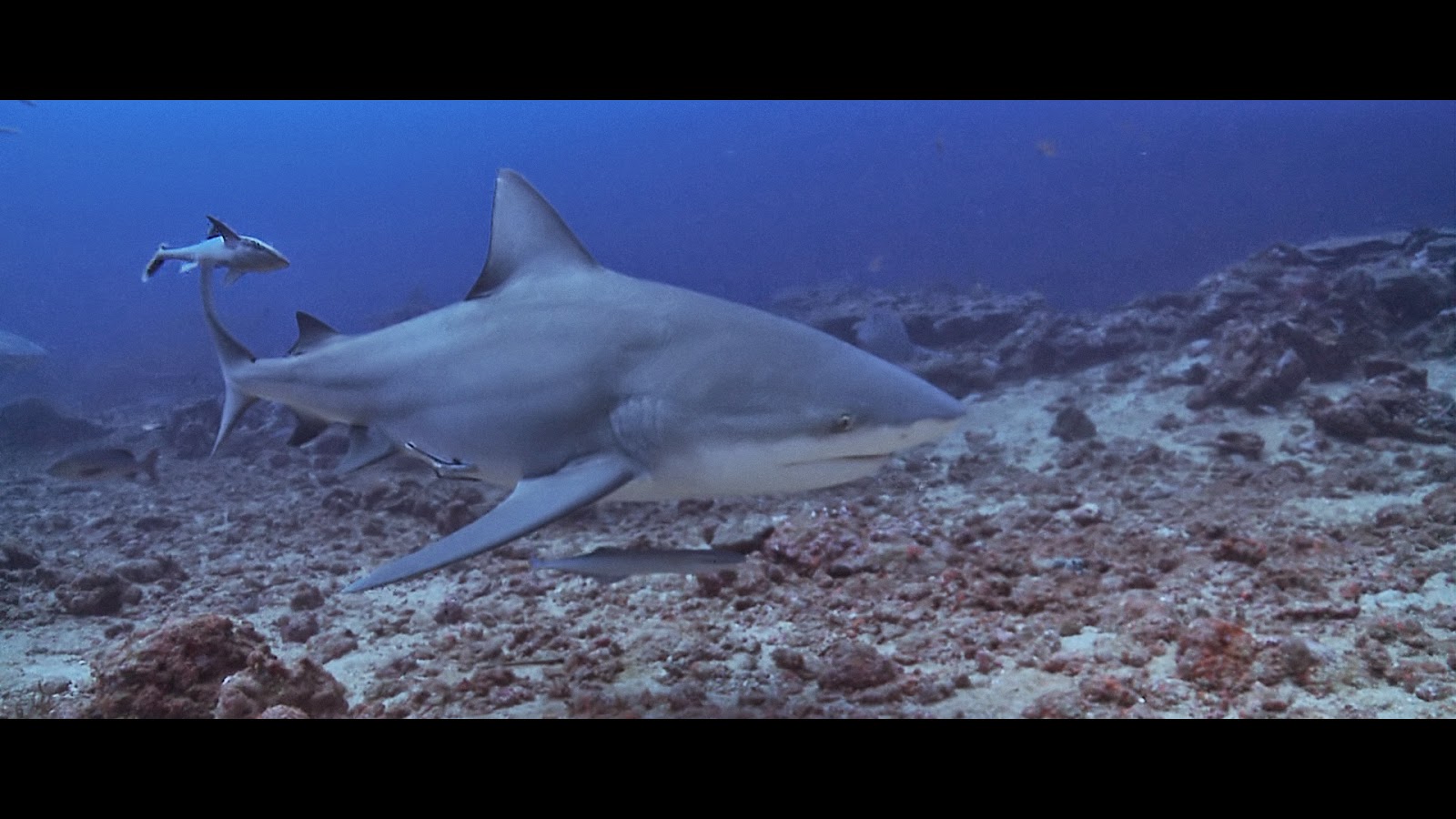 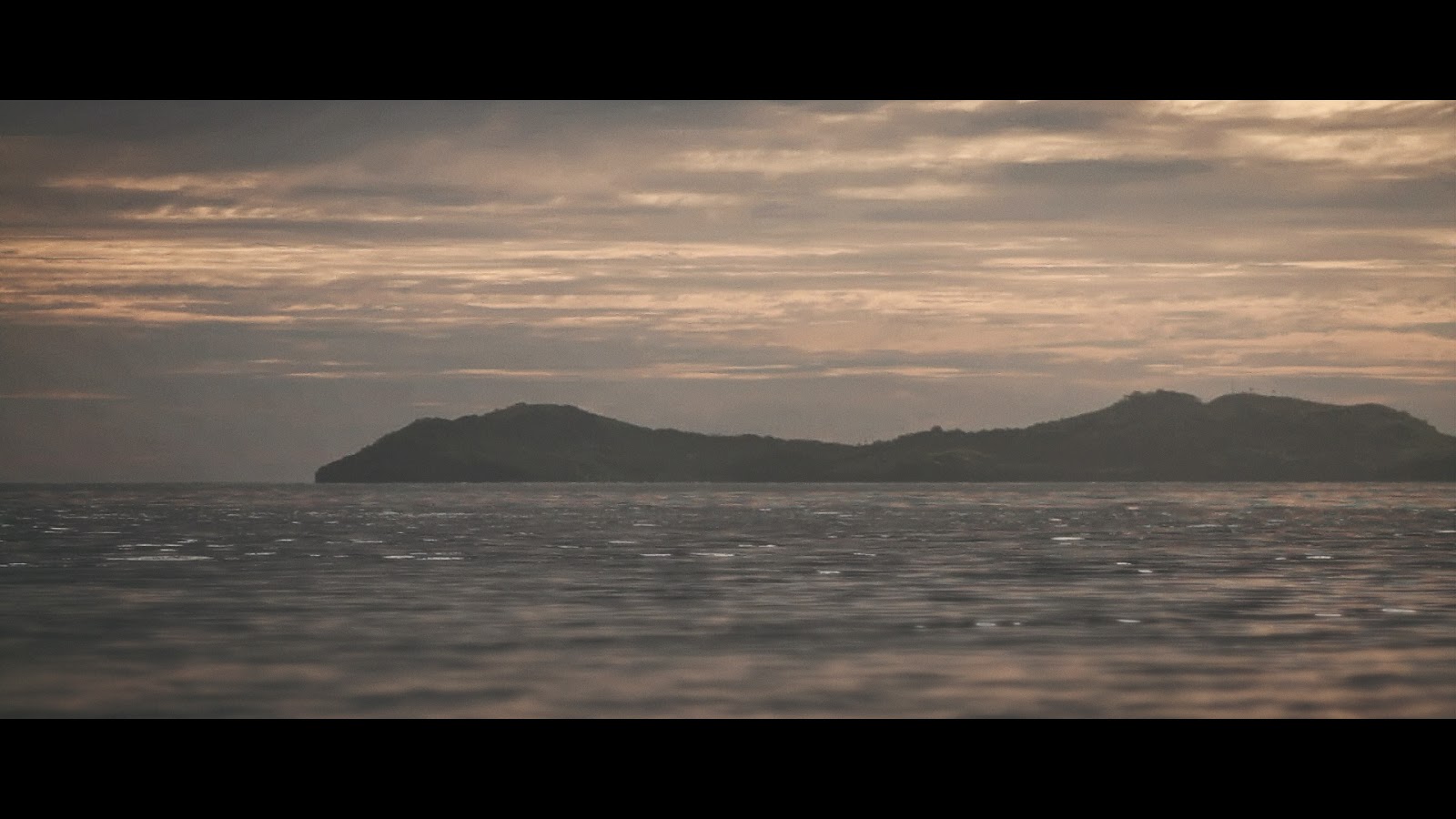 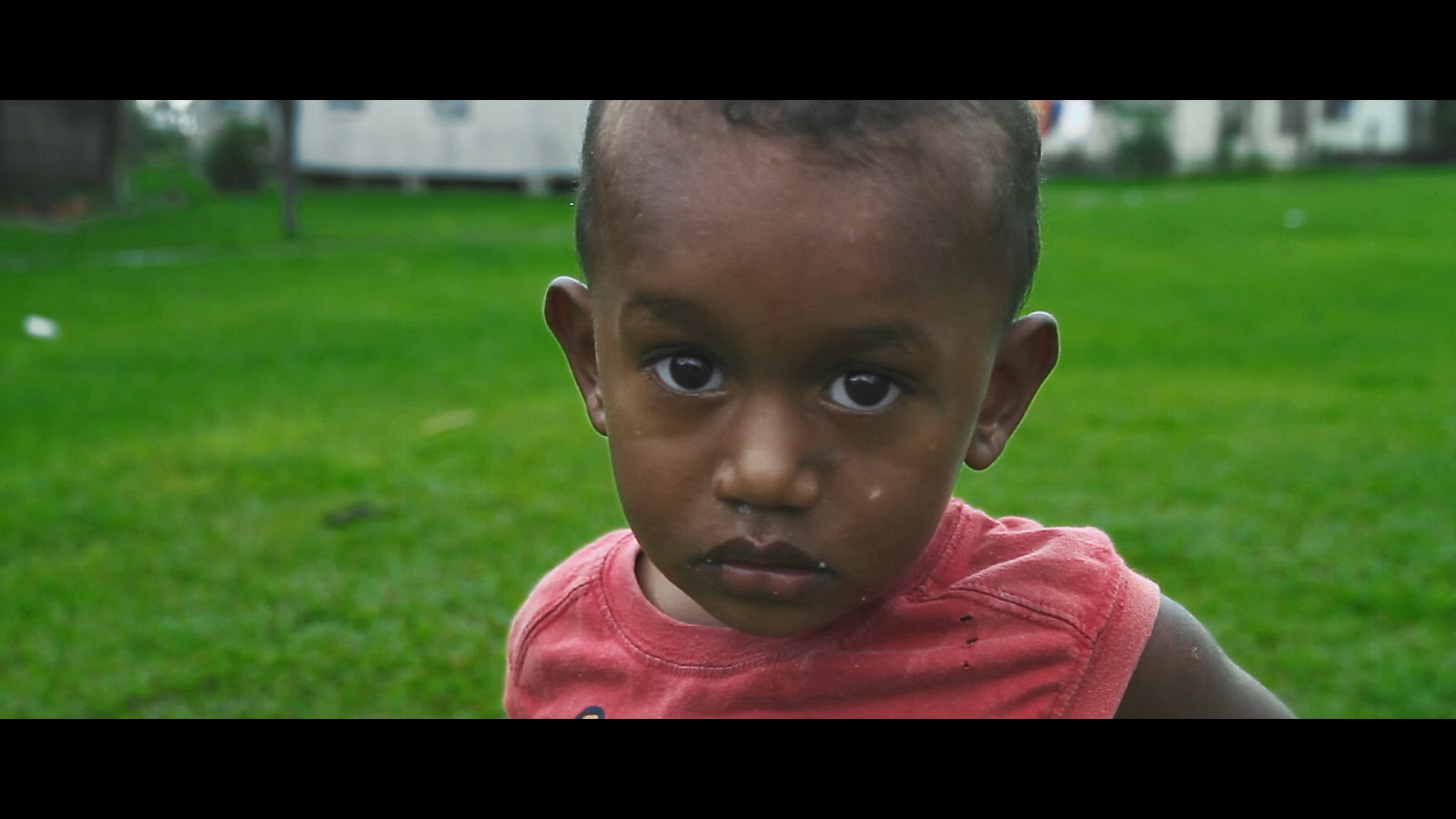 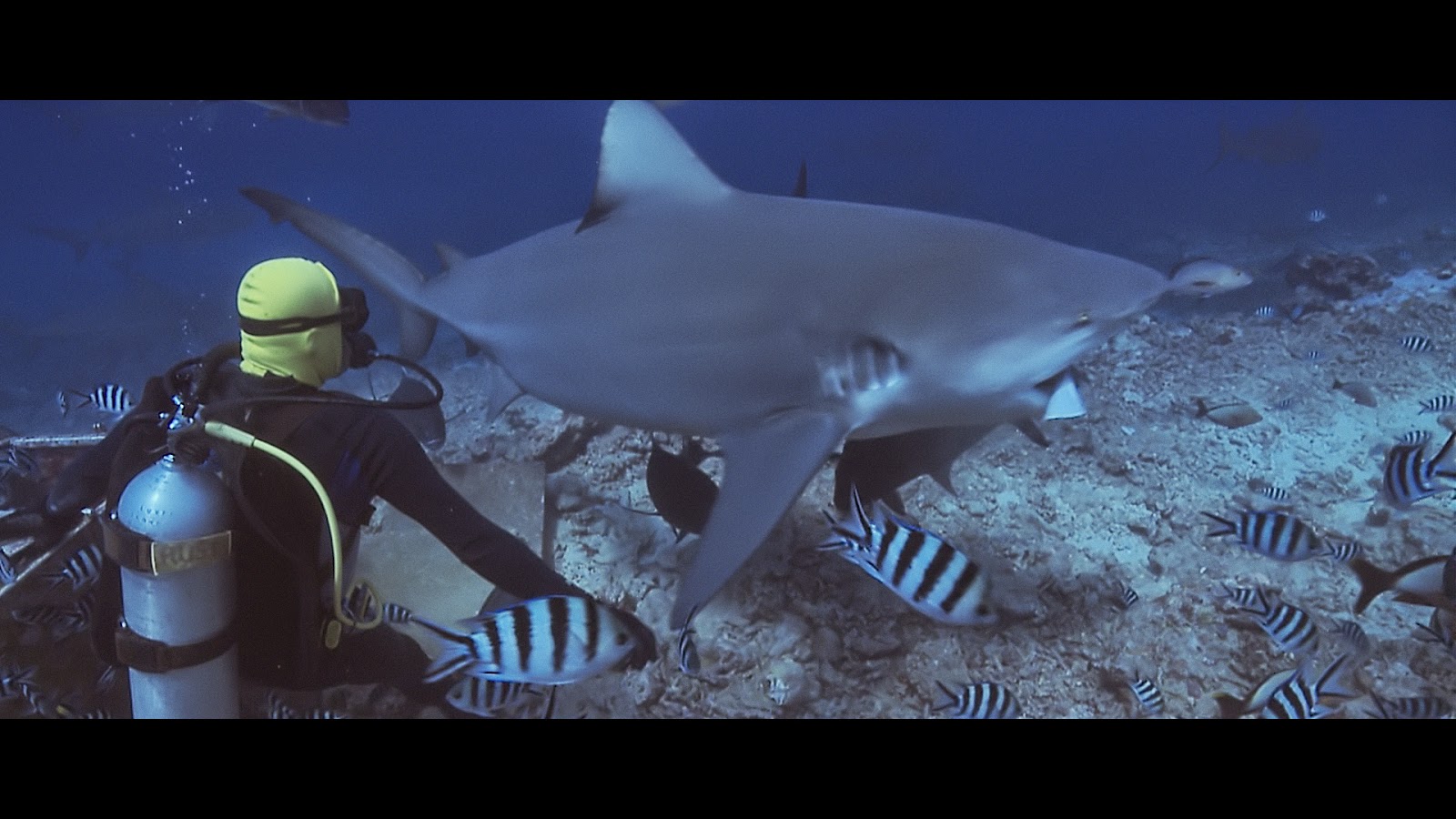 I have gone for a complex grade made up of five separate stages to give the film that "epic" cinematic film look you don't really see much in factual film these days. Colour is a big part of the story and is used very much as a storytelling tool, I may do a breakdown of the grade for the Behind The Scenes film when I've finished everything...Maybe. 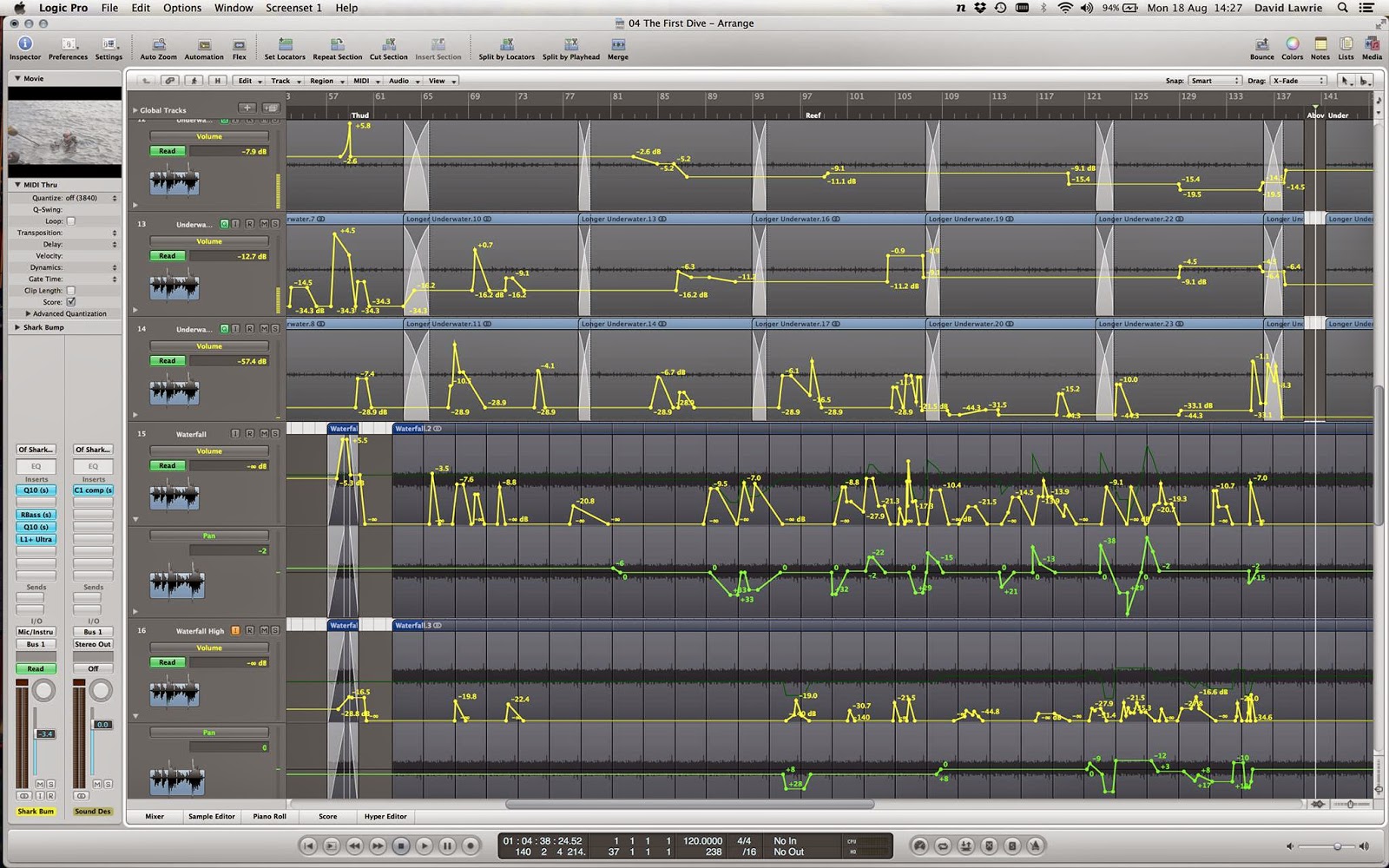 Regardless of how amazing your film might look, if the sound sucks, then so will your film unfortunately, you can cheat badly shot footage but bad sound is the killer of films and if your sound is amateur, you will be viewed as "just an amateur." Your story deserves better.

The above is a screenshot of the Sound Design for just a few seconds of "Of Shark and Man," which is being put together by the brilliant David Lawrie and it sounds spectacular. I knew I wanted a huge, ambitious and complex sound design for the film so finding Dave has been such a blessing, not only can he decipher what I am saying in regards to what I want in there and take on board my suggestions of how to achieve that, he uses his considerable expertise to take what I want and make it so much better. Every frame of the film will have probably between 15-20 "elements" of work in it and that is why the film has taken so long to get this far but this was never a sprint, quality is the key and that sometimes takes a long time.

There are four sections remaining to be graded thus meaning the grade will be finished this week, the Sound Design is about halfway done and the intro titles are also almost complete, when all this is done, the film will have a first cut ready for industry tests. I appreciate everyone's patience, most of all Jane, Martin and all associated with Tourism Fiji who made this possible however, I can guarantee the wait will be worth it.

If you want to jog your memory, check out the three teasers below and in which, you can also see the obvious progression the film has taken along the way.

"Of Shark and Man" - Teaser Trailer 1 from Scarlet View Media on Vimeo.


"Of Shark and Man" Teaser Trailer 2 from Scarlet View Media on Vimeo.

Posted by OfficetoOcean at 15:30 No comments: