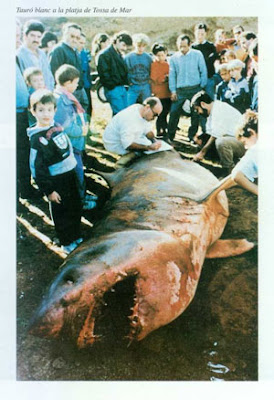 Yep, that's a huge Great White Shark and yep, it's in Spain. This specimen was washed ashore at Tossa de Mar in 1992 and as you can probably imagine, caused quite a stir, enough of a stir for the local authorities to try and squash the story before it got out, terrified at the impact it would have on tourism. Nobody really knows what exactly happened to the shark or how it sustained the injuries which led to it washing up on the beach, although still alive, clearly in severe bad health. Don't just take my word for it, watch this


What does this have to do with the subject of this blog? Not much, but anyone who knows me or who reads this blog knows I love Spain dearly and I have a particular interest in Mediterranean sharks. The fact that there are sharks at all, let alone specimens like the shark in the video, in the Med is still barely known amongst the wider public but there they are and they are in desperate need of help.

Make no mistake about it, everything you read about the desperate state of our oceans and no matter how bad it is in the ocean nearest you, it's worse in the Med. It has been absolutely ravaged, obliterated of life in a relatively short period of time, including its elasmobranchs, with estimates ranging from 90-99% of its resident sharks now gone.

The Mediterranean is the cradle of civilisation, the body of water where ocean trading and industry began and the place from which the first ever written document of an interaction between man and shark took place, when I say interaction, I of course mean that a hapless sailor was eaten by what was probably a Great White Shark, whilst taking a dip from his ship in waters off Greece. 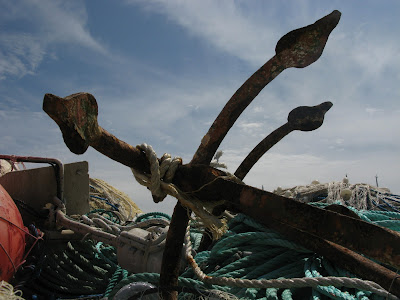 That the Mediterranean is in the dire state it is, is tragic, and it pains me to say that historically, Spain has contributed to the Med's demise possibly more than any other nation. However, could there be hope?

Your best chance of seeing a shark in Spain remains either in an aquarium or the markets. On that list are six species of shark, six species which if you moved to Spain or the Balearic Islands you almost certainly would still never see, even if you visit the fish markets when the boats come in, something I actually enjoy doing and find fascinating. I have seen a picture of an Angular Rough Shark in a Spanish market, the last confirmed sighting of a Smalltooth Sandtiger I can recall from Mediterranean waters was around 1998 off the southern coast of France, I haven't a clue when the last reliable report of a live Mediterranean Sand Tiger was and it's common knowledge that all Angel Shark species have taken an absolute hammering in Europe.

Spain, unlike the UK, traditionally speaking anyway, has not been seen as a nation of animal lovers, that isn't to say people in Spain hate animals, that would of course be ridiculous, but the relationship between animals and people in Spain was once more one of tolerance or complete indifference than affection. However, in keeping with the changes in attitude towards conservation and repsect for animals around the world, Spain and its people have made huge strides forward and this change in attitude in Spain is reflected in this decision and young Spaniards now have the same affections for animals and conservation as we in the UK do. Bear in mind the British and to a slightly lesser extent, American, relationship with animals is unusual in that, whereas other nations keep and love animals, we actually make them parts of the family blurring the line between man and beast and that is part of our culture, many other nations look at us because they think what we do is weird. Just because we do it, doesn't mean it's autmoatically the right thing to do.

What has all of that got to do with anything? Well, think about it, a nation which once had a very different attitude towards animals and conservation is introducing a law giving special protection to some species of sharks and that my friends is progress, small progress, but progress nonetheless.

Too little too late? Maybe, in fact probably, but if we react to news like this with a sigh and a shrug of the shoulders we will never solve anything. A win is a win and this small victory is a step in the right direction, it's not the species specific protection laws that made me see this in a positive light, it's the fact that the single biggest contributor from the developed world, to the unsustainable trade in sharks, has started taking the right steps in shark conservation and is listening to what the scientists there, scientists like my friend Gabriel Morey, have been telling them for years.

Let's hope this is just the beginning and nations like Spain continue to see the benefits in protecting not just sharks, but all marine life in the Med because boy does it need to happen and quick. it will take a miracle to rescue the Mediterranean but remember, miracles do happen!

Posted by OfficetoOcean at 16:15 6 comments:

Trouble ahead for Fiji's sharks?... ...I sincerely hope not.

In the month I spent with the sharks of Shark Reef, I developed a genuine love and affection for them, not the all encompassing love I have for all sharks but a deeper bond, one similar to that which I have for the people of this amazing place and because of that, I am worried about news I am hearing of seemingly recent developments there.

This article by Helen Sykes has the details and Mike's blog adds some more and includes a video so have a look as there is really nothing I can add to what they are both saying.

The good news is that with Helen and Mike on board, Fiji's sharks have a genuine fighting chance. I had the pleasure of spending time with Helen and interviewing her for "Of Shark and Man," and I was extremely impressed. We do disagree on some things but that doesn't alter my opinion that Helen is one cool lady. She is passionate, articulate and clearly determined to do whatever she can to protect all Fiji's marine life and the habitats in which they live and I have a great deal of respect for her.

Remember also, the people of Fiji are still fighting for their wonderful nation to become the world's first Melanesian Shark Sanctuary which would be a gargantuan win for the Sharks, Manta Rays and all marine life there so whilst we digest the sobering news in the links, we must also realise that people there are working hard to protect every single shark in Fijian waters.

This isn't about harassing annoying American TV personalities, this is proper conservation at work, whereas the former will not save one single shark from a premature death, the work Helen, Mike, CORAL, Pew and the countless other people behind the scenes there are doing, might just save millions so give them your support.

A shark carcass being sold for F$2 (about sixty pence), or a live shark making millions for the local economy year on year? Hardly takes a rocket scientist does it?

Posted by OfficetoOcean at 14:29 No comments: