Behind Blue Glass Released To The World TODAY! 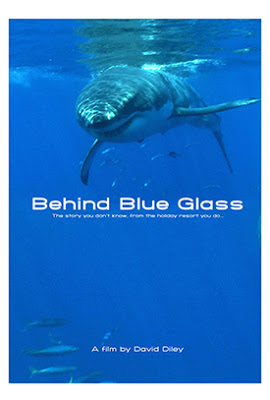 "For years some of the largest Great White sharks ever landed, were caught off the coast of Mallorca, sometimes less than one hundred metres from popular tourist beaches. These captures abruptly stopped after the second largest White Shark ever caught was brought back to the dock by fisherman, Xisco Perez. The year was 1976, the year Steven Spielberg's JAWS was released in Spain.

The story has remained largely untold outside of Mallorca until now, David Diley explores why, along the way taking seven unwitting volunteers into the deep, to show how important sharks really are, how shark encounters are actually a positive thing and show the world what is truly at risk.

This was the first film I ever made and features content never before seen on TV, including eyewitness accounts from the people who were there. Behind Blue Glass premiered to a packed room in Portals, Mallorca, in May 2011, after its DVD release earlier that year."

Two years ago, whilst working towards getting "Of Shark and Man" funded, I figured, rather later than I should have in all honesty, that in order to help me get said funding, I should really actually go and try my hand at making a film!

I'd wanted to do a comprehensive piece about Mallorca's Great White Sharks for years, since my first visit to the island in my early teens and thanks to an email out of the blue from a certain Mr Brad Robertson, asking my advice on his Shark Diver course, after having stumbled across this blog, the wheels were set in motion for the start of a pretty amazing journey!

I'm not going to tell the whole story again, this blog post will tell you everything you need to know as a back story... 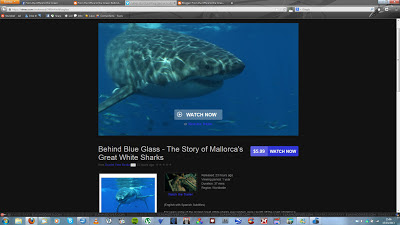 So, here's the big news...As of today, you, yes YOU, can now see Behind Blue Glass, in its entirety, in full HD, thanks to Vimeo's new "On Demand" feature which, to be frank, looks to be quite brilliant!

Behind Blue Glass was released on DVD only last year, available to buy direct from Palma Aquarium, but I'd been looking around for ages for a place where I could offer a digital download in return for a small fee but everywhere seemed to charge through the nose, take large cuts of sales and make it overly difficult to just get the thing out there.

I've been waiting for On Demand to be launched since I first heard of it last year. Available only to Vimeo Pro members, On Demand actually makes the whole process easy to do. You upload your film, give them your paypal account details and launch your film. They take 10% and that's it. It's so simple! All you need to do is visit the page click "Watch Now" put in your card details and you get to stream the film from Vimeo on any device, anywhere, for as long as I am a Vimeo Pro member so basically, years and years. You know that the majority of your money goes to the Film-Maker which is where the majority of your money should go but often doesn't in more traditional distribution agreements.

The film is very reasonably priced at $5.99 which is £3.95, or €4.58 at the current rate of exchange, in fact, it's under-priced to be honest, for 37 minutes of film, you're practically stealing it from me ;) After I have covered my own costs, a percentage of each sale will go towards Asociacion Ondine and the ongoing Mallorquin conservation projects we are running, currently at our own expense.

So, why should you pay your hard earned money to see this film? Firstly, it's almost certainly the most in-depth documentary about Mallorca's Great White Sharks ever made, certainly the most detailed English language film on the subject, on the planet.You also don't know this story, it's a brilliant story and you are absolutely guaranteed to learn something new.

Having watched the film again last night for the first time in a while, the amount of content and factual information is pretty staggering. There is a wealth of info packed into less than 40 minutes, probably more than you would find in other, shall we say, "bigger budget" and more "professional" productions and not just that, the whole thing comes from nothing more than just wanting to make something fun, a little bit different and to tell a great story. There's no cynical attempt to try and sell you things, it's just a guy who really loves sharks, making an interesting film to hopefully appeal to other people who really love sharks! 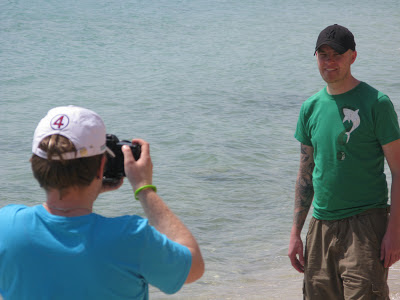 Behind Blue Glass will always be very special to me because it was an amazing experience to make it and because of everything that has followed it. This was my first ever attempt at making a film, not my first film after film school, not my first paid job, I'd bypassed all of that, this was the first time I had ever attempted to produce, direct, present and shoot a film...Ever. Only eight months prior, I was working as a Recruitment Consultant with my only experience being filming sharks on diving holidays and making videos of myself and my friends acting like idiots whilst drunk on New Year's Eve!

Of the four man crew (well, three men, one woman) only Liam had any experience, this was literally four mates, three of whom  had no idea what they were doing, trying to complete an enormously complex and ambitious project, in fact looking back, the goals I set were completely unreasonable, naive, way too ambitious and complex but somehow, we managed to pull it off through sheer bloody mindedness and determination.

We absolutely ran ourselves into the ground on this film, the average shoot day lasted 14 hours, one day on pre-production, Brad, Bea and I started at 3am and didn't finish until 1am the following day with no breaks. Also nobody really got paid, most of you reading this will be paid more today, sitting at your desk than the people involved in this film got for three weeks of solid grind. It was incredibly hard work but one of the happiest times of my life. 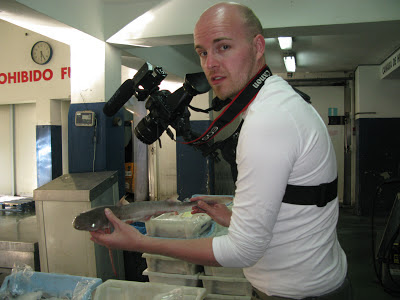 OK, let's be honest, it's far from perfect, it's rough and ready, there are things I would do very differently now, knowing what I know but you know what, who cares? I really don't think that matters because taking into account what we had to go through, I still look at this film as a pretty incredible achievement. That's not me blowing my own trumpet, that's testament to everybody who rolled up their sleeves and got stuck in to help us make it. Brad and Bea almost killed themselves to make this happen with their sheer effort and passion, Debora, Roman, Manon and the guys at Palma Aquarium were an amazing help. Jaime Ros, Soller Museum, Gabriel Morey, all the volunteers, Xisco Perez, the list of people who gave their time and effort, free of charge to help get this made is huge and without them, it wouldn't be what it is.

Huge thanks also to Richard Theiss and Lawrence Groth for the additional footage which again, they contributed for free.

So for the imperfections, the fact that the sound department was either Bea or local kids, Brad and Bea being handed cameras and expected to do a crash course in cinematography whilst actually shooting segments on the spot, the obligatory "things not working properly at the worst possible time," the fact I had to wear sunnies through most shots due to an eye problem and the often improvisational approach to film-making, I am incredibly fond of this film because not only is it way better than anyone's first film should be, it has a heart and soul at its core of people just wanting to do something good and start something.

And start something it did. Behind Blue Glass was the big first shove behind the marine conservation projects now being rolled out by Brad and Bea in Mallorca, Brad is now running a full time Conservation NGO, people suddenly started taking an interest in marine conservation, including the media, it directly led to "A Ray of Light," one of the headlining films in this year's Beneath The Waves Film Festival and also taught me more in three weeks on how to shoot films than any film school could, meaning it helped enormously in the making of "Of Shark and Man." It's fascinating to me to see the enormous progression and growth from film to film and Behind Blue Glass has a lot of the credit for that.

Wow, you REALLY love sharks! It was a privilege to be involved in the film, congratulations on getting it out there, Vx

I'm glad that comes across as I wasn't sure I was being transparent enough ;)

Thank YOU for being involved, it was an amazingly enjoyable and rewarding few weeks :)