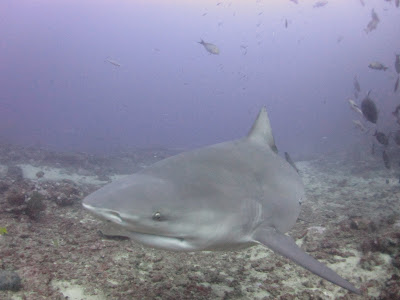 We're almost half way through production of "Of Shark and Man" now and the brevity of what I am actually doing is finally totally sinking in. I'm not only directing, producing and promoting my first feature length film, I am doing it with a crew of only three, on the other side of the world where life is very different to what I am used to back home and you then have the added fact that I am doing it surrounded by up to 100, yep that's ONE HUNDRED huge Bull Sharks. This is a big, big task to pull this off but hey, pull it off we are!

I have managed to see more of Fiji than just the beaches and underwater. Alfie here at Uprising, who has been nothing short of superb, took us to the mountains that lead into the jungle the other day and the scenery was stunning, really stunning. A pterodactyl circling the various huge mounts wouldn't have been out of place! 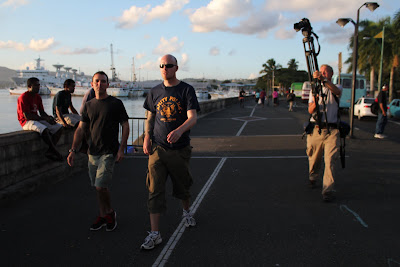 We have also been to Fiji's capital, Suva, twice to film and do some interviews with Alfie (above is a pic of us both looking super cool whilst being filmed by Hugh) and it's a great place, very photogenic and tonnes of atmosphere.
It has become clear to me that this experience is about boundaries and barriers. I am most passionate about integrating myself with the locals and in particular Mike and his amazing staff. I have the utmost respect for them all and I hope that when I leave, they can feel some respect for me also. Today Mike even implied he will be a little sad when I leave so I think he's starting to become quite attached to me being here...eh Mike? ;)

The other connection I want to make is with the sharks. I have begun to enter into the unspoken dialogue with the sharks here on Shark Reef and I am aiming to increase that communication further in the remaining dives. It's a relationship, you respect them, hopefully they have at least a modicum of respect for you, if that isn't there then you can forget them either a) coming close to you and b) seeing you as something other than a vulnerable flapping idiot in the water and I would hope that isn't the case with me!

Watching Shark Week or just general shark shows on television does not prepare you for the experience of diving with sharks on Shark Reef. I have dived with many different species in many different places but things are very different here. If you're a "shark hugger," forget it, they don't care and will make mincemeat out of you at the drop of a hat. These sharks are enormous, if I didn't know better I would half think Mike had grown these giant Bull Sharks in a lab somewhere to do his bidding as and when he wishes. Speaking of communication with sharks, it's not a generic thing, you can't just open a "dialogue" with sharks and expect them to listen. It;s species and location specific, here on Shark Reef, the level of understanding Mike and the boys have with these animals is astonishing, it really is a two-way street and to watch how Rusi, Manasa and Tumbi control the feeds is a glorious thing to behold, man and shark in a symbiotic relationship where the sharks have learned a specific way to behave during these feeds. Of course this can never be fully controlled but here is possibly the best example in the world of how to do it.

I am learning so much not just about the art of film-making, how to communicate with the sharks here and the general ins and outs of "Shark Heaven" but mostly about myself and of what I am capable in these situations. I am so relaxed around these animals, sometimes I have to pinch myself to appreciate the situation I am in. There is also a heightened sense of awareness and when these two sensations allign, it's a feeling of pure joy and experience. I want to earn the respect of the B.A.D Boys enough to continue to get even closer to these sharks and experience Shark Reef to the fullest of my ability and to earn the respect of the people who see the shark as a God, I feel a kinship with them, I can only hope that can be reciprocated by the time I leave.

Today I did a dive on Shark Reef on a non-feed day for a specific section of the film and wow, what an experience, nine Bull Sharks allowed me into their back yard to watch them behave as they would normally and the point of this? To disprove that these shark feeding areas become more dangerous to ordinary divers, they don't and there's no proof, in fact, today we got the benefit these feed sites can give, guaranteed, chilled out sharks that were all too happy to have us there, no aggression, no threat, just two different animals hanging out. Brilliant!!

The film is really taking shape, I'm slowly getting my tan and Mike is giving me the impression that when I leave, his "little Swiss heart" will actually break...What's not to like?!

Please cross all your crossables for me for a Tiger Shark to turn up as well. One has but it was the day we weren't diving and my new friends from Broadreach got a hell of a show in our absence, gutted for me, delighted for them. I want a Tiger so bad it hurts!

See you soon, sorry for the lack of pics, the internet connection here is painfully slow!

One final thing, Jane West and Martin Harlow at Fiji Me, thank you, you made my dreams come true, I just hope I can repay the faith you have shown in me.