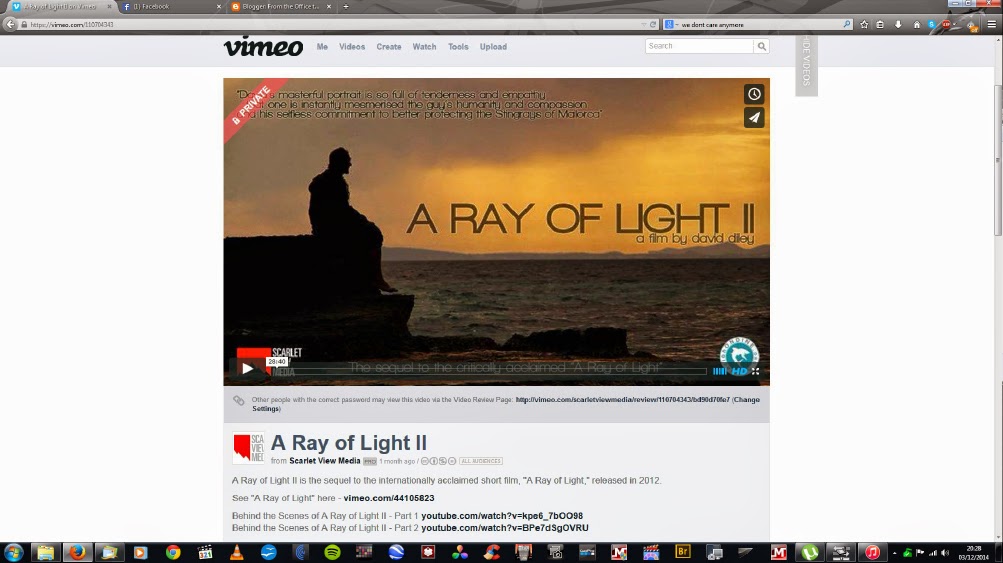 Ready and waiting for you!

It's not been easy sitting on A Ray of Light II for so long, it seems like forever really, but I'm excited to say that it will finally see the light of day on an internet near you sometime around midday UK time on Monday, December 8th.

If you haven't already seen them, please do take a bit of time to check out Lockie's two "Making Of" featurettes below:


The three weeks in Mallorca shooting the film was a big challenge to say the least, exhausting both physically and mentally and at times emotionally draining and it shows in the film.

Whereas the first film was a pretty straightforward affair, this was anything but and has a far more expansive, documentary feel to it. As opposed to taking a retrospective look at things that have already happened, A Ray of Light II gives you an insight into things as they happen and an intimate and deeply personal look at how Brad's life has changed in the two years from the first film.

It's a longer film, coming in at just under 29 minutes, the cinematography is better, the sound is better, the story is better and the overall look of the film is a vast improvement from the first, which people still comment very favourably on. The post production of the film was a big job, much bigger than I expected and I think the time and effort I took to get the film how I wanted really shows in the finished result.

A small group of people have already seen the film outside of the premiere and feedback from both has all been overwhelmingly positive so I'm pretty confident if you liked the first, you'll hopefully like (maybe even really like) A Ray of Light II.

As with the first film, A Ray of Light II will be free to view online wherever you are in the world (barring maybe North Korea), that doesn't mean it was a cheap production, far from it! With that in mind, Vimeo's "Tip Jar" feature will be enabled so if you enjoy the film and want to show your appreciation, feel free to chuck a few quid/dollars/yen/whatever in there, every little bit helps recoup costs but of course there is no obligation.

I do ask though that if you enjoy it and value the film and/or the project featured within, that you share the film on your Social Media, Blogs and Websites with a description of why you're sharing it, the more people aware of the work of small, independent Conservation orgs like Asociacion Ondine, the better, they really are a shining light in the marine conservation world.

So, set a reminder, mark your calendars, A Ray of Light II is out this coming Monday. As always, feedback is warmly welcomed!