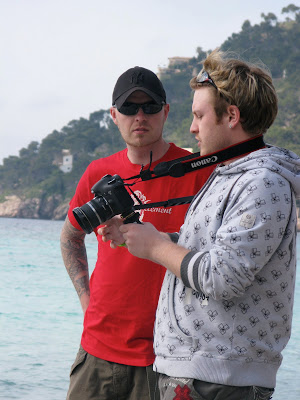 With all the excitement and ever increasing workload of the upcoming production in Fiji, it might have been forgotten that I am actually doing post-production on my first ever film, "Behind Blue Glass," well you may have forgotten, I certainly haven't!
I've already mentioned what an incredibly enjoyable experience it was shooting this film but now is the time to fill you in on what to expect and hopefully you'll be chomping at the bit to spend approximately twenty minutes of your life, with a cup of tea and a plate of biscuits, actually watching it! "Behind Blue Glass" is a short film, based in Mallorca and for which I came up with the idea in late February and to the credit of Brad and Bea at Ondine Escape and the guys at Palma Aquarium only took three weeks or so to get the required funding to actually go and make it. 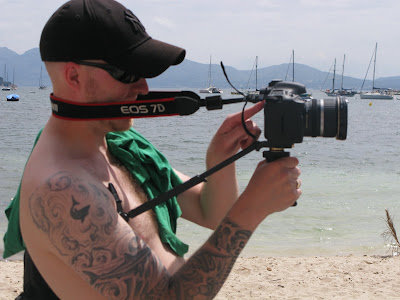 The film is centred around two main aspects, telling the story of Mallorca's history with sharks, in particular, the Great White and also showing that sharks can have a life changing, positive effect on ordinary people.
The Mallorquin relationship with sharks and its story is one which is very much untold, particularly for a non-Spanish audience, google it and see how little there is online! Undeterred and with a decades old fascination with sharks in this part of the world, I was determined to go and delve deeper into it and did so with no shortage of success! For example, did you know where the second largest, recorded, Great White Shark ever caught was taken? Yep, Mallorca, less than one hundred metres from shore in a popular tourist resort. Surprising yes? I doubt you will have heard the story about this before so who better to tell it than the man who caught it, Xisco Perez? My thoughts exactly so look no further than this film as he was kind enough to let me talk to him about it on camera. 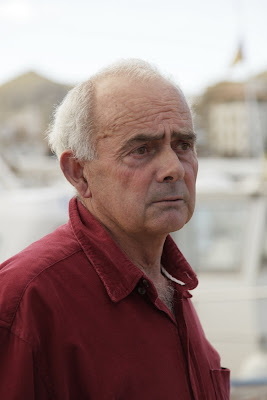 Xisco is a fantastic bloke and gave up over an hour of his time to spend with me talking about what happened, by the boat upon which the shark was caught and was ably translated by another fantastic Mallorquin and new friend, Jaime Ros.
The last surviving set of Great White jaws in Mallorca? Check, eyewitness reports from the people who were there and saw these huge sharks in the flesh? Check, input from the people who know more about Mallorquin Great Whites than anybody? Check, it's all in there for you! 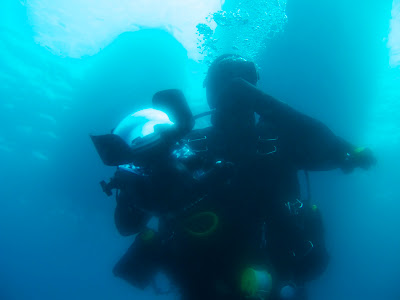 Passionate, knowledgeable and incredibly helpful people were certainly not in short supply, another of these people, IUCN member and fisheries and conservation minister for the Balearics, Gabriel Morey, was kind enough to not only talk to me on camera about the state of Balearic and Mediterranean shark populations, he also took us diving at the El Toro marine reserve to get some footage of Mallorca under the waves.
Alongside the conservational and educational aspect of the film we have a little bit of inspiration as well in the form of a group of plucky volunteers, young and old and all shapes and sizes who agreed to participate in a "conservation project" but didn't know exactly what I had in store for them, they got a bit of a shock to say the least but their reactions are priceless and illustrate my point about people and sharks better than any words. Every one of them was fantastic and an inspiration to me and to see them now spreading a positive message about sharks is hugely rewarding.
So what was intended to be a ten minute piece about people meeting sharks, shot on a minuscule, shoestring budget has turned into something so much more, Liam aside, this was the first time any of the crew, myself included, had attempted to make a film, staying true to my word of involving talented, enthusiastic people in everything I do, we even got a couple of the volunteers involved in actually making the film itself getting the kind of hands on experience they may not normally get.
So what is the result? Most importantly, a film with heart, no pretension, just enthusiastic people with a love for and deep knowledge of sharks, combined with an everyman approach and an awful lot of smiles! Sound good? Keep an eye out, I am currently editing at the moment and some of the footage looks superb and I am very happy with the way things are going, hopefully it will all be completed by the end of this month with a premiere to come at Palma Aquarium and after which, you lot can get to have a look and make your own minds up.
This film is a celebration of sharks, of people and of Mallorca, one of my favourite places on earth and to who's people I owe huge gratitude. It's not a mini version of the film in Fiji as it differs in several areas, it is less "cinematic" with more of a "documentary" feel but it is no less, very "me." I'll leave it up to you guys to decide what you think of it but I'm confident you'll love it!
"Behind Blue Glass" - Coming soon!
Posted by OfficetoOcean at 17:18

Email ThisBlogThis!Share to TwitterShare to FacebookShare to Pinterest
Labels: Balearic Sharks, Behind Blue Glass, film, From the Office to the Ocean, Mallorca, Ondine Escape, Palma Aquarium, Sharks in Mallorca, Sharks in the Mediterranean

i also have a passion for sharks and i am particularly interested in the white shark population in the med,is there anywhere you could put me onto that gives latest supposed sightings and stories as i struggle to find information on the subject.

keep up the great work

There isn't really a great deal of resources out there that keep up to date with GWS sightings in the Med, I am lucky in that a friend of mine is a biologist and European shark specialist so I get to hear of them when they do so often, I'll blog them here.

A good resource for Med sharks of all species though (captures mainly) is Shark Year Magazine - http://sharkyear.com/2013/noteworthy-shark-records-from-mediterranean-and-european-waters-march-to-august-2013.html

There has been a possible GWS in Mallorquin waters this year but not as yet confirmed although recently, there was a capture in Mallorca of a Copper Shark for the first time in many years.

I hope that helps?

yes that helps a lot mate

i think the lack of information adds to its appeal and mystery,my family think im tellin porkies when i tell them if the presence of white sharks in the med just before they jet off on there hols:-)

Totally agree! I love the mystery surrounding the whole issue, it makes it all the more fascinating

just incase you havnt seen this yet.
off morocco

I have indeed mate, in fact I was going to pop it in the blog, thanks for the reminder!