The life of the lone film-maker. It's hard. Since I started out on this life altering career change, I have been contacted a lot by people who have offered encouragement and some incredibly kind words, I have also been contacted by people who are also trying to set out on their own path and finally do the things about which they are passionate.

One of those is a guy in South Africa with whom I've become friends, he has big ideas and also the belief that he can pull off what is a monumental challenge which is the biggest part of doing anything like this, you have to believe it is possible, which of course, most things are.

I did the difficult bit in that I actually got to Fiji and did what needed to be done, plus, despite the fact I was working all day, every day, it's hard to look at what I was doing as "work," I was doing what I have always wanted to do, there was always a support system there to bounce ideas off and I was spending every day with sharks!

During pre-production, a team of people sit around a table, storyboarding and bouncing ideas of each other, while a line production team do all the running around and planning of logistics so the creative people don't have to worry about all that. The same or at least similar applies to production and in the post-production stage, a team of editors will sit with the director and they will thrash out the best way to tell the story through image, sound and music, several pairs of eyes and ears digesting every nuance and this is how great things happen, talented, creative people, being creative together.

Herein lies the problem, I had and have none of that.

I love the editing process, from cutting things together to choosing music, to colour correction, the whole shebang, I love it and it seems to appeal to my meticulous nature but there comes a time when inspiration dries up or logistics dictate you hit a brick wall.

I currently live (temporarily I hasten to add) in York, if you don't already know, York is a place in England beloved of American tourists, primarily because it adds to the illusion that England is still very much in the 18th century because York hasn't really progressed much since then, to be totally honest, it is an inspirational void, I don't know anyone here and the only people I see on a daily basis are my parents.

This is not good for the post-production of the most important film I will ever make. 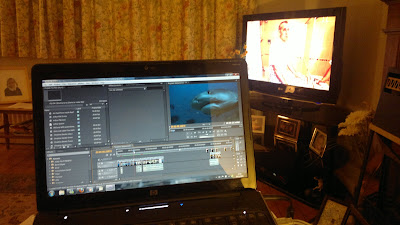 I made a specific decision to edit in sequence, that is, to edit the film in the order in which I want it to run, there are a few reasons for this and one of those is the highly stylised and conceptual intro to the film. That intro sets the tone for what follows and it is imperative I get it right. Most of the shots for the intro have been done and have involved repeated trips back to Manchester on the train, lugging a camera, lenses, tripod and slider around all day, hoping I can find the images I need. The shots I still need to get are shots which I simply cannot do on my own, they either feature me in them or require actors and locations. I am awaiting confirmation of two locations but that of course is out of my control and Liam who worked with me on Behind Blue Glass is booked in for April 7th to shoot the stuff with me in, stuff which pretty much has to be done in one day only.

All these shots have had to be conceptualised in my own mind with nobody there to offer alternative ideas, suggestions, criticisms, encouragement or to simply listen to me describing them. Such an internal and insular approach to what is intended to be expressive, thought provoking and fresh is not conducive to the process moving quickly and as such, this process of putting together the intro is going painfully and frustratingly slowly.

Since returning from Fiji in August, I have had sole responsibility for converting every single shot from up to four cameras, logging and editing that footage into manageable Premiere Pro folders and syncing up all the sound from two mics, that took until January to complete. I have put together two short films I was commissioned to make, negotiated my way around a distribution deal for "Behind Blue Glass," started sourcing and recording music, written, re-written, re-re-written and re-re-re-written scripts and structure notes, written a five page magazine article and in amongst all of this, navigated my way around basic survival and getting money in any way I possibly can.

What I will say that is more positive, is that what I have of the intro, looks superb, I mean really, really frickin' good, the music is amazing (done by an incredibly talented musician I stumbled across online) and the concept is getting there, it's incredibly complex and every single shot has to be nothing less than perfect so if my two location requests happen, Liam and the Banter Media crew can help me get these shots done with me in and if I can nail the images to fit three specific narrative points, then I will be in a position to crack on with the actual sharky stuff! It will also mean that the trailers will be forthcoming... 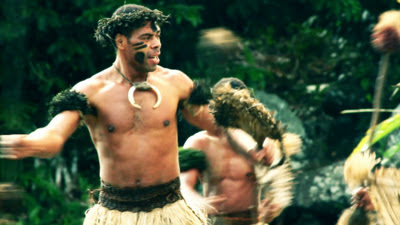 If I could, I would get myself back into 21st century civilisation and surround myself with things which inspire me but until then, I'll be burning the candle at both ends to get this intro sorted as soon as possible. One good thing to come of the obstacles and barriers which have been out of my control, is that it has afforded me opportunities to let ideas breathe and develop and for opportunites to arise to shoot some amazing things. I said from the offset that I won't consider this film finished until I am certain I cannot improve upon it, no matter how long it takes, so please be patient, I'm not just obsessing over details for the sake of it, this film is as much for you as it is me, I also owe it to the people of Fiji to do the job properly.

If I could offer any advice to anyone reading this it is to think ahead to when you will be in the lonely part of film-making, can you ensure you will be in a good location with good enthusiastic and supportive people? If so, get that nailed down and build a team around you who you know have the best interests of your film at heart because they will be your most valuable asset. If you can't guarantee that, steel yourself for months and months of long, long days, for challenges, obstacles and for the kind of frustrations that at times, make you want to scream but...stick with it!

And to you, the people who will actually watch this film when it's done, please be patient, it will be worth the wait.

I never said this would be easy...

Email ThisBlogThis!Share to TwitterShare to FacebookShare to Pinterest
Labels: Banter Media, Editing, Film-Making, From the Office to the Ocean, Independent film, Of Shark and Man, Post Production, shark film

At least you have not yet resorted to naked media disasters on street corners in L.A!

Chance would be a fine thing! I love LA and I am also not adverse to nudity :D